IFN Executive Director, Dr Randy Beck attended the Science on the Swan Conference, June 5-7, 2019, in Perth, Australia. Established as part of the Western Australian Health Translation Network, Science on the Swan event is an annual health and medical science conference that allows a unique opportunity to hear from local and international Health Science Specialists at the forefront of their fields. Invited researchers had the opportunity to showcase their research, whilst networking with local and international clinicians, researchers, healthcare professionals, universities, hospitals and research institutes. Dr Beck presented the IFN research consortium’s recently published paper “ Abnormal cortical asymmetry as a target for neuromodulation in neuropsychiatric disorders: a narrative review and concept proposal” in a poster format over the three days of the conference. “The paper was warmly received and created many discussions and networking possibilities for future collaborations in research and treatment for people with neurological disorders and I look forward to being invited back again next year.” stated Dr Beck. “ I was impressed by the quality of the distinguished speakers and presenters and was especially inspired by the keynote address from science journalist, producer and presenter Dr. Michael Mosley.” 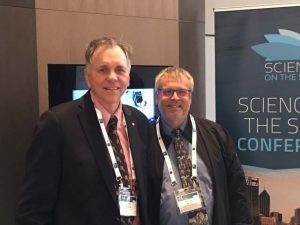 Dr Randy Beck and Professor Barry J. Marshall discuss Autism and neuroplasticity at the Science on the Swan conference. Professor Marshall was the recipient of the Nobel Prize in Physiology or Medicine in 2005 for his discovery of the bacterium Helicobacter pylori and its role in gastritis and peptic ulcer disease.